Let’s go over what Time-of-Flight is and what the differences between iToF and dToF are.

So, you’ve come here because you want to know more about how Time-of-Flight works. Great! We’ll go over some basic definitions and use cases below. First thing’s first…

Time-of-Flight actually refers to the Time-of-Flight Principle. The Time-of-Flight Principle is based on measuring the time it takes for a wave of light (typically IR waveforms that span lengths from 700nm to 1mm) to travel from a source (dToF) to an object and back. ToF is one of several methods of capturing 3D images to recreate depth perception using structured light imaging (where a structured image, such as a grid, is projected onto an object and the shape and distance of that object is calculated based on the distortion to the grid). 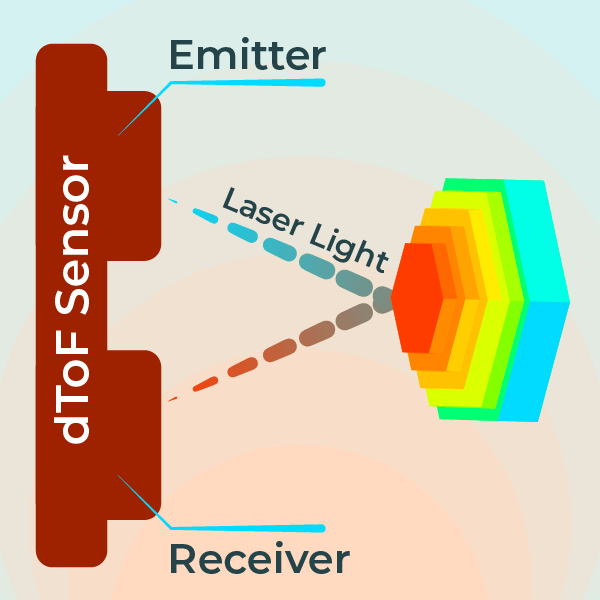 A large advantage to ToF is its ability to operate even when there is little to no light. ToF is considered an “active” imaging technique, one that relies on projecting its own light. With that being said, they may perform poorly in natural surroundings(exposed to sun). Shiny surfaces and corners are also areas where the sensor may perform poorly. Thus, while ToF may work on short ranges, it may not be the best for use-cases where not the range, but the accuracy is the ultimate consideration.

Their accuracy is largely dependent on the distance from the object as it is generally estimated at 1% of that value (so if an object is 5 meters away, a ToF camera can achieve an accuracy of about 5 cm).

Get what you need for your next ToF project!

Where do you apply the time-of-flight principle? 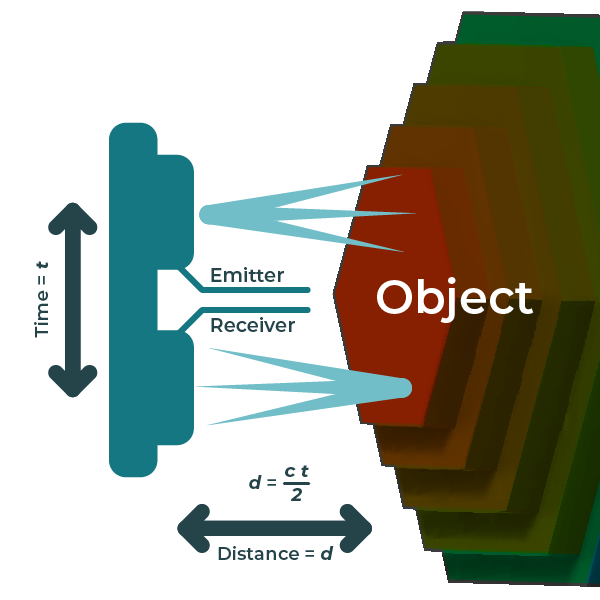 What is the difference between dToF and iToF?

Now that we understand what ToF is, let’s get into what separates DToF from IToF.

dToF (Direct Time-of-Flight) – Method used in all Sparkfun ToF devices. Involves a simple, direct measurement of the time until reflection is detected. Direct ToF sensors send out short pulses of light that last just a few nanoseconds and then measure the time it takes for some of the emitted light to come back

What makes the device an imager?

The device actually acts as a camera. In fact, new sensors are coming out with higher resolution IR and depth images. ToF is considered an “active” imaging technique, one that relies on projecting its own light.

How does the grid work?

With the SparkFun Qwiic Mini ToF Imager – VL53L5CX, multi zone distance measurements up to 4000mm are possible across all 64 zones with a wide 63° diagonal field-of-view which can be read up to 15Hz. Thanks to ST Histogram patented algorithms, the VL53L5CX is able to detect different objects within the FoV. The Histogram also provides immunity to cover glass crosstalk beyond 60cm

Why Do Cutting Boards Have Holes? Grooves? – Home Stratosphere