Giordan heads to CU to see what cool projects the students are making for their final projects.

The Engineering Projects Expo is where CU Boulder engineering students have the opportunity to present everything they’ve learned, culminating in capstone design projects. Students come from all different backgrounds: mechanical, aerospace, electrical, computer, energy, and architectural engineering, as well as creative technology & design, mathematics, and computer science. Here are a few of the projects that we thought were interesting (and contained SparkFun products). 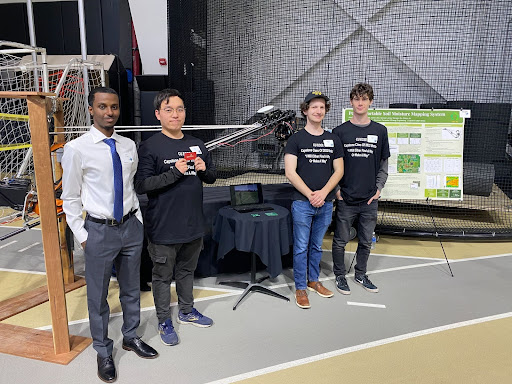 Soil Moisture Mapping is typically done with an unmanned aerial vehicle. The Person-Portable Soil Moisture System is an affordable alternative to aerial soil moisture mapping. The Raspberry PI 400 Personal Computer and Raspberry PI Capacitive Touch Display were purchased from SparkFun and provide a higher resolution than what is typically found in similar products, which makes it useful for surface mapping, precision agriculture, and evaporation and transpiration studies for layer heat transport. In their words, “The more affordable Person-Portable Soil Moisture Mapping System allows users such as researchers, landowners and farmers to map their land for volumetric soil moisture (VSM).”

This rover was crafted to mitigate the risk of human life in acquiring samples in small spaces and uninhabitable environments. The rover is controlled via an Xbox® controller capable of collecting, storing and depositing geological samples. Members of this team plan to pass along the project to the senior class of 2023. The SparkFun GPS-RTK Board – NEO-M8P-2 (Qwiic) was used in this project. 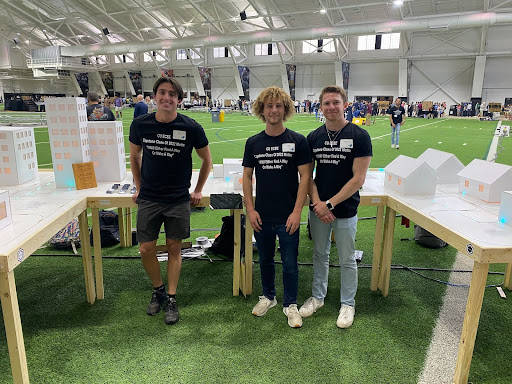 In this team’s words, “EVEE is an interactive, user-directed exhibit in which a scale electric vehicle (EV) is controlled throughout a model electric grid by a custom web app. EVEE is an educational tool that demonstrates how proper use of EV’s and mass deployment of renewable energy can improve electric grid resilience, power, quality, and create a more efficient energy system.”

The PCB used by the EV was custom designed by the students. Our SparkFun fuel gauge schematic was reverse engineered to create the ability to view the state of charge and direct A/D measurement of battery voltage.

According to this team, “The Bulls EyeHigh Performance Test System features a compression interface that simplifies mating/un-mating to a PCB. By moving two pairs of test cables successively through several test points on the PCB.”
Motor driver madness! This team fried over 10 motor drivers while configuring their stepper motors. With three motor drivers connected to one microcontroller, when one motor driver goes in flames, so do the others. Like their shirt says…

“I will either find a way or make a way.”